I had problems with WiFi and internet access in my area yesterday, and couldn't post my TBR review -- but decided not to give up and I'm posting it today. May's theme for the TBR Challenge is: more than one book by an author in your TBR. I have a few books by Kristen Ashley and decided to read and review her much lauded Motorcycle Man, a book that has been sitting and gathering dust in my Kindle for a long time. 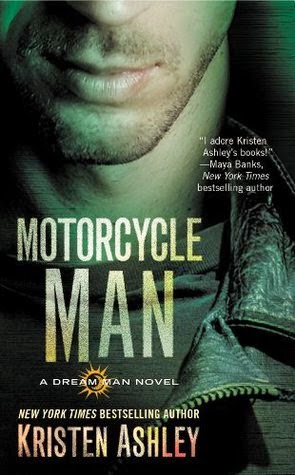 I think I will always remember Motorcycle Man as one of the most cringe worthy romance reads ever. Yet, I read it in its entirety. There is something to it, that's for sure, but I don't even know where to begin explaining what it is. I'm stumped.

The characters in this romance live an alternative lifestyle that takes place, for the most part, within the narrow confines of a motorcycle club and the homes of its members. Tyra falls into this world after quitting her job and finding one at a body shop owned by the Chaos Motorcycle Club. The Saturday before she starts her job, she parties with the Club members and ends the night by having sex with Tack, the president of the MC. During the aftermath, Tyra daydreams that Tack is 'her dream man' but is quickly disabused when he dismisses her from his bed. On her first day at work these are Tack's words to her:

Because she's desperate for a job at this point, she stays and the sexual harassment begins. They go back and forth;


"I am not going to warm your bed!" I fired back.
"Oh yeah you are," Tack returned.
"You don't even know my name," I retorted
"Nope, and I didn't before when you sucked my cock, I ate you, you fucked me hard and I fucked you harder. Didn't bother you then."
"I thought you knew my name?"

Tyra fights back and continues to feel a combination of deep attraction and fear for hawt, scary biker dude Tack as they play his game until she succumbs and becomes his biker-babe  -- because he colors her world.


"I like everything about you, honey. Everything. Lived in black and white seems like all my life. Never noticed. Not until you colored my world."

He finds her irresistible:


"Every day, somethin' new. Will I ever get to the heart of you?"

There's are kidnappings, screeching fights with a disgusting ex-wife who must be the worst mother ever, a battle with the Russian mob, blood, and lots and lots of hot, sex, love, misunderstandings, and well... more sex and love. And they live happily ever after:

In Ashley's MC world, women fall into categories: "babes," "bitches," "the Club's whores," and wives/girlfriends="old ladies." These women are not supposed to worry their gorgeous little heads about their men's business in the club or the danger they may be exposed to (after all their men are taking care of it and keeping them safe), and for the most part they accept it all without question.

The men are an uber-alpha variety of scary biker dudes who "claim" women when they are interested, and have a problem communicating in full sentences. Some of them are married and cheat while others are monogamous, and while some are portrayed as having soft hearts, all have that extra bit of over-the-top alpha DNA that doesn't always sit right because the balance of power in relationships and respect are severely lacking.

So here is where I go back and forth: As you see from the quotes above and my summary, Tyra and Tack fall in love. While lust and sex remain the central focus that drive intimacy, this is a romance and Ashley works hard to make it work. Because, despite all those cringe-worthy moments and objectionable language, Ashley also includes touching if rough-edged romantic moments between Tack and Tyra. The evolution of Tack as a romantic protagonist is rough because he learns how to treat Tyra so she won't leave him, but the all-around lack of respect for other women is highly questionable. Tyra's ultimate acceptance of her "place" as a woman in Tack's world (because although she "fights" it, she also accepts it), made this a tough read. I know Ashley is portraying an "alternative lifestyle," I'm just not sure how accurate it is, and it's not one that it's easy to relate to -- at least not for me, not if I get to be called someone's "bitch." It can't be denied, however, that even as this is a grating, button-pusher type of romance, Ashley has a way of keeping the reader going.

I'm glad that I finally read Motorcycle Man because every time a book by Ashley releases, fans compare it to this book. I wanted to know what that was all about. Personally, and going against the tide, I'm really happy that my first book by Ashley was The Will.

Category: Contemporary Romance
Series: Dream Man
Grade: C = Because Ashley really works the romance in this book and I finished it even as my comfort zones were severely challenged.