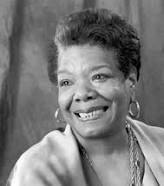 It has been announced that Maya Angelou: poet, civil rights activist, dancer, film producer, television producer, playwright, film director, author, actress, professor, and renowned author of "I Know Why The Caged Bird Sings" (1969) died today. A three-time Grammy winner, nominated for a Pulitzer, a Tony, and an Emmy for her role in the television mini-series "Roots," Angelou was a woman whose works are admired, not only in America, but world-wide. On a personal note, Angelou is one of few authors/poets whose written works my daughter and I have shared, loved, and admired throughout the years.


From Maya Angelou's poetry collection I Shall Not Be Moved (Random House, 1990)

You may write me down in history
With your bitter, twisted lies,
You may trod me in the very dirt
But still, like dust, I'll rise.

Does my sassiness upset you?
Why are you beset with gloom?
'Cause I walk like I've got oil wells
Pumping in my living room.

Did you want to see me broken?
Bowed head and lowered eyes?
Shoulders falling down like teardrops.
Weakened by my soulful cries.

Does my haughtiness offend you?
Don't you take it awful hard
'Cause I laugh like I've got gold mines
Diggin' in my own back yard.

Does my sexiness upset you?
Does it come as a surprise
That I dance like I've got diamonds
At the meeting of my thighs?

Out of the huts of history's shame
I rise
Up from a past that's rooted in pain
I rise
I'm a black ocean, leaping and wide,
Welling and swelling I bear in the tide.

Leaving behind nights of terror and fear
I rise
Into a daybreak that's wondrously clear
I rise
Bringing the gifts that my ancestors gave,
I am the dream and the hope of the slave.
I rise

I rise
I rise.