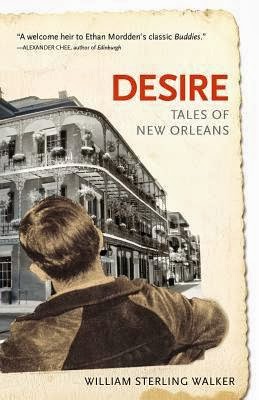 There are places that exude an atmosphere of casual sensuality that can be felt, smelled, and tasted. The residents of such places absorb the atmosphere like sponges until they become part of the place and the place becomes part of them. The City of New Orleans is such a place. In his collection of loosely related short stories, Desire: Tales of New Orleans, William Sterling Walker captures the essence of this city until, with its strong presence and influence, New Orleans takes center stage and breaths life into each and every character. Walker's beautiful integration of music -- classical, jazz, 80's pop -- and art adds to the overall sense of time and place, capturing moments, depth of feeling, and often creating the illusion of a written snapshot suspended in time.

Walker's descriptions of New Orleans are also intrinsically connected to themes found in his collection, -- with "connection" the most prevalent theme throughout -- to the character's conflicts, and to their personal desires. The heat and oppressive humidity may be connected to voracious or subtle physical needs. The stagnation of a place where the past is present may be found in conflicts faced by quite a few of the men, and the gravitational pull that the city exerts on its denizens as if it were a living entity is mirrored in the friendships and relationships between the characters.

The word desire, as in the title of the book, usually brings to mind sexual want or hunger. Humans, however, desire much more from each other than the physical and Walker incorporates both in his stories. He breathes life into his stories through his characters, the friendships they share, their loves, losses, needs and desires. Moments, events, conversations, assignations, paralyzing fear, pain and regret, all become connected through friendships and hookups in a pre-Katrina gay community that learned early about tragic loss while experiencing the plague years.

I first read Walker's short story "Farewell to Wise's" in the Best Gay Stories 2013 anthology and what really struck me about it at the time, what made me love it, was the fact that the place and characters became real to me. I found that same quality in the rest of his stories. Walker develops intimate interactions and dialog between his characters, slowly revealing layers and, in the process, giving them a depth that becomes an essential part of his portrayals. This development leads readers to become fully invested in both the characters and the conflicts they face.

I know I will reread this book for a couple of reasons. Throughout the time it took me to read it, and after, I fell asleep in New Orleans thinking about the characters and woke up the next day in New Orleans still communing with them. But, most importantly, Desire: Tales of New Orleans is a book that strongly reminded me of the "why" behind my love for short stories. Highly recommended.