Alice Munro: A Prize & An Excerpt

Just last week, my brother A. and I were discussing short stories and great short story writers over drinks, and I told him that the older I get, the more I seem to love and appreciate both. He and I share the love. So, here I am smack in the middle of reading Alice Munro's last book, Dear Life, and first thing this morning he wakes me up (early!) with a text to let me know that Ms. Munro won the 2013 Nobel Prize in literature. Needless to say we were both excited by the news.

Alice Munro is a Canadian author born in the southwestern Ontario area, a setting she uses in most of her stories. Her writing and works are admired and have been widely recognized. The Academy's announcement for the Nobel Prize calls her a "master of the contemporary short story." Peter Englund, permanent secretary for the academy told The Associated Press that, "She has taken an art form, the short story, which has tended to come a little bit in the shadow behind the novel, and she has cultivated it almost to perfection" 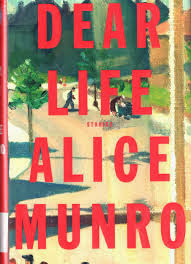 Since I am reading Dear Life at the moment, I'd like to share a short, rather interesting excerpt* from Munro's short story,"To Reach Japan."

Greta should have realized that this attitude -- hands off, tolerant -- was a blessing for her, because she was a poet, and there were things in her poems that were in no way cheerful or easy to explain.

(Peter's mother and the people he worked with -- those who knew about it -- still said poetess. She had trained him not to. Otherwise, no training necessary. The relatives she had left behind in her life, and the people she knew now in her role as a housewife and mother, did not have to be trained because they knew nothing about this peculiarity.)

It would become hard to explain, later on in her life, just what was okay in that time and what was not. You might say, well, feminism was not. But then you would have to explain that feminism was not even a word people used. Then you would get all tied up saying that having any serious idea, let alone ambition, or maybe even reading a real book, could be seen as suspect, having something to do with your child's getting pneumonia, and a political remark at an office party might have cost your husband his promotion. It would not have mattered which political party either. It was a woman's shooting off her mouth that did it.

People would laugh and say, Oh surely you are joking and you would have to say, Well, but not that much. Then she would say, one thing, though, was that if you were writing poetry it was somewhat safer to be a woman than a man. That was where the word poetess came in handy, like a web of spun sugar.