Written in Red: A Novel of the Others by Anne Bishop 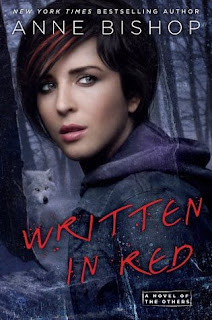 Last month when I was suffering from some serious reader's block, Nath recommended Written in Red by Anne Bishop, a fantasy with romance elements or "urban fantasy," and the first book of Bishop's The Others series.

Meg Corbyn is on the run and inadvertently finds refuge at the Lakeside Courtyard where the Others rule and uninvited stray humans can easily become the evening's dinner or next day's "special meat" at the butcher shop. Meg is a cassandra sangue, or blood prophet, with a special ability to see visions of the future when her skin is cut. For this reason, she has been kept enslaved her entire life by a Controller in a government sanctioned facility where her visions are sold for profit. Meg knows they won't allow her to stay free for long. Luckily, she finds a job with the Others as Human Liaison and gains their trust and protection.

Simon Wolfgard is the head of the Lakeside Courtyard. He deals with humans because he has to, and although the Courtyard has been set up to bring humans and shifters closer, Simon has little understanding and/or respect for humans. To him they are nothing more than prey. However, when Meg comes in looking for a job and a place to stay and Simon notices that she doesn't smell like prey, he hires her to work in the mail room as their Human Liaison. But he's aware that she is lying about something and her weird smell drives him a little crazy from the beginning. When Meg is discovered, will the Others protect her? Or will she die at the Courtyard as her vision predicts?

I loved the shape-shifters in this fantasy. The Others are not your cutesy, likable shape-shifters, vampires and/or elementals. Oh no! In Bishop's world these are ancient beings who roamed the earth before humans evolved, and humans exist only by the Others' leave. They are portrayed as a rather scary different breed, as unlike humans as they can possibly be, with a disregard for human life and contempt for what we think of as humanity. While the two sides have worked out a livable and workable agreement, in this world the Others are top dogs and humans, the underdogs.

As the head of the Lakeside Courtyard, wolf shape-shifter Simon Wolfgard is a total control freak when it comes to keeping his people and his territory safe. He is cold and ruthless with very little understanding or caring for humans (or Others) who break his laws. However as a result of Simon's  interactions with Meg, there is character growth as the story moves along. What I liked about his character is that although he accepts some changes, Simon maintains the edge that makes him different to the end.

Meg's character on the other hand is a bit of a problem for me. She is an extremely likable character both to the reader and to the characters in the story. Meg wins hearts and minds easily with her kindness, naivete, and nobility. I loved the scenes between Meg and the young wolf shape-shifter Sam, the growth that you see in her as she slowly comes out of her shell and makes friends around the community is heartwarming, and those moments when she stands up for herself are encouraging for the future. Throughout and by the end of the story, everyone who knows Meg is willing to do whatever is necessary to protect her life because she deserves it.

My problems? Meg is not a kickass heroine, which is usually okay with me, but she comes off as a bit too naive, nice, sweet and perfect (a Mary Sue), although one with growth potential. But Meg is such a nice and kind soul that her likability factor is on the high end of the scale and I have a feeling that as she stays around the Others, she'll learn how to take care of herself -- that's where the growth potential comes in. Additionally, there are some very strong female secondary characters that serve as a great contrast to Meg. What really became a bit troubling for me is the cutting and the description of how this affects Meg. Cutting is such a serious issue that I'm not quite sure how I feel about the fact that Bishop is using self-mutilation as the trigger for Meg's "special power." I'm actually withholding my final thoughts on that until I see how Bishop works this issue into the series.

There's also a romance building between Meg and Simon in Written in Red. Actually it is more of a special friendship between Simon and Meg that bloomed from hostility and distrust. Simon's wolf actually accepts Meg first, and there is a matter of trust and bonding going on there that I really like. Obviously sweet Meg is not ready for more and frankly I don't think that Simon is ready for an intimate relationship with a human either. I believe he has a long way to go yet.

Written in Red is a well-written, character driven fantasy with a bit of action, mystery, edginess, gore, and a touch of humor that surprised me. The secondary characters -- Monty, Tess, Henry, Vlad, Sam, Jasper -- play significant roles and are worth mentioning because they make this a well-rounded read. The action is limited but makes an impact, and the mystery revealed at the end is well done. However, when it comes to villains I was a bit disappointed as the threat felt more dangerous than the reality, particularly Asia who in my opinion comes off as more TSTL than truly dangerous. Of course there are threads left open to resolve in future installments and I look forward to finding out more! Even with my reservations, my grade is going to be on the high end. I really enjoyed Written in Read as a whole (read  it in two straight sittings!), and see a lot of potential in this fantasy series.