The theme for this month's TBR Challenge is "new-to-me-author." Unfortunately, I picked up and discarded a slew of books that just did not work for me this month -- an unusual event that I think has more to do with my current "reader's block" that the books themselves. In the end, I decided to read a book from a favorite author's backlist. Pamela Morsi. 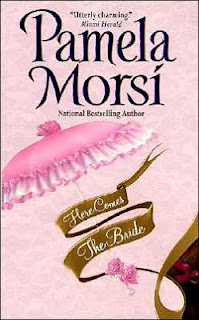 There comes a time in every woman's life when she must get herself a man or give up on the idea entirely. Augusta Mudd had reached that moment. Miss Gussie, as she was known to all, was in the spring of her thirty-first year. All through her twenties she had reminded herself that there was still plenty of youth ahead. At thirty itself she had taken comfort in the fact that she was barely out of her twenties. But thirty-one --- thirty-one was definitely an accounting that brought realization, or perhaps even resignation.

"Get it done or past contemplation."

Thus begins Here Comes the Bride by Pamela Morsi. It is the late 1890's in Cottonwood, Texas. At thirty-one, Gussie has inherited a successful ice-making business and property from her father. She has become a keen businesswoman happy with her lot in life, but is missing only one thing to make it complete -- a man. Gussie is also a straight shooter and after walking out for three years with Amos Dewey, she decides that it is past time that he proposes, but since he hasn't, she approaches him with her own marriage proposal. Go Gussie! But, Amos bulks and flees leaving Gussie angry and not a bit humiliated, but not defeated. She thinks about the situation overnight and comes up with a plan to have a perfect wedding and her man.

The next day she approaches her employee, Rome Akers, with a direct proposal: to make Amos jealous and bring him to heel, all Rome has to do is pretend to be Gussie's new beau. As an incentive, Gussie offers Rome the partnership in her business – his dreams come true. Rome admires Gussie for her business sense and straightforward manner and thinks she deserves to be happy. He has certain reservations about this plan, but being an ambitious young man, Rome accepts and throws himself into his role wholeheartedly.

Problems soon arise when both Rome and Gussie realize they have much in common and begin having fun together. Admiration for each other grows and kisses soon come into the equation. In the meantime Amos is fighting his attraction for Pansy Reynolds, the town's wicked widow and Rome's longtime secret lover. Rome and Gussie, Amos and Pansy will have to make decisions that in the end may break their collective hearts.

Here Comes the Bride is another romance where Morsi uses the collective town to both aid and to create conflict while developing the romance. There are two factors that play a major role here, human nature and societal views of the times. Morsi plays one against the other deftly by using two couples whose lives interact closely, but that in the end deal with two very different conflicts.
Morsi's female characters drive the story, and not surprisingly, they also contrast sharply against each other. Gussie is the virginal, sexually naive female who shows strength as a businesswoman with a keen mind and not a few feminist views. However, Gussie works within traditional boundaries set by local society so that she is accepted and respected regardless of her role as a business owner. This stands out only because this historical romance is set in a small town where conservative views prevailed.

Pansy, on the other hand, is portrayed as a widow who loved her husband and was a faithful wife, but became the town pariah after her husband's death when she rejected society's traditions by taking lovers. Pansy is scorned and only allowed to gain love and/or show courage through public self-humiliation. Morsi also makes a point of showing that although men may also be shunned by a conservative society for having illicit liaisons, they are quickly forgiven, particularly if or when that man is a respected businessman. Money, respectability, sex, and religious foundations -- all very interesting subjects that interconnect from a historical perspective in this romance.

The romance between Gussie and Rome is sweet! I loved Rome's admiration for this woman and his absolute adoration and passion for her once the two click. And Gussie's contradictory character is another favorite, as she goes from being an authoritative and driven businesswoman to a woman in love who learns to appreciate passion in her life. The romance between Amos and Pansy on the other hand did not work for me. I believe that is because I couldn't stand Amos and his brutal rejection of Pansy or his lack of understanding/care for Gussie. I did not buy his love for Pansy or frankly, Pansy's love for Amos. I did like Pansy! I liked her loyalty and courage, even though I hated, hated, hated what she did in the end.

Here Comes the Bride is a historical romance that seems sweet on the surface. However, Morsi is sneaky in that she makes her romances seem simple, but by keeping her characters true to the mores of the times, she also manages to make points that make me think in contemporary terms. As always, an enjoyable, solid read, by a favorite author.