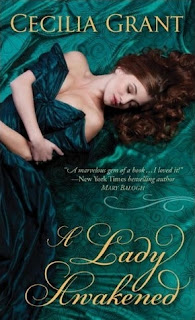 Newly widowed and desperate to protect her estate and beloved servants from her malevolent brother-in-law, Martha Russell conceives a daring plan. Or rather, a daring plan to conceive. After all, if she has an heir on the way, her future will be secured. Forsaking all she knows of propriety, Martha approaches her neighbor, a London exile with a wicked reputation, and offers a strictly business proposition: a month of illicit interludes . . . for a fee.

Theophilus Mirkwood ought to be insulted. Should be appalled. But how can he resist this siren in widow’s weeds, whose offer is simply too outrageously tempting to decline? Determined she’ll get her money’s worth, Theo endeavors to awaken this shamefully neglected beauty to the pleasures of the flesh—only to find her dead set against taking any enjoyment in the scandalous bargain. Surely she can’t resist him forever. But could a lady’s sweet surrender open their hearts to the most unexpected arrival of all . . . love?

A Lady Awakened by Cecilia Grant is such an interesting historical romance read. It has moments of brilliance and I love so much about it, yet there's just something about it that turned me off. Well, I know what turned me off. It was Martha's characterization and some of the plotting devices.

What did I love? I loved the setting and the fact that the gentry is highlighted in this romance instead of the ton. I think that Grant captured that small country village community beautifully. Grant also went for a character driven novel with unusual characters. Martha is severe and comes off as uber-cold and emotionally unavailable, yet in contrast, underneath her black widow's weeds she is caring enough to stand up and sacrifice for duty and responsibility. She's a complex character. Theo on the other hand is a carefree young man of his time who initially seems to have no regard for duty or responsibility. Eventually though, we see that there is more to Theo, and although Martha influences some of his actions, most of the growth comes from him. He is an inherently good man, a man who should be admired for more than his beauty, charm and prowess in the bedroom.

I did have problems with some of the plotting devices. Although I bought the "pregnancy to inherit plot" because lineage was such an important part of life during that time, and widows so hard up if not provided for by dead husbands, unfortunately there were also rather improbable moments . The 21st Century mentality that went into those moments were a turn off for me and pulled me out of a story with characters that otherwise had all my attention.

Martha's characterization? We never really know why Martha is so emotionally unavailable when compared to her siblings. Was it that she was brought up by a strict governess once her mother died? Was it her experience with the dead husband? Was it the combination of the two? What made Martha such an open champion of other women in an era when women did not necessarily stand up for other women? What made the town stand against a possible titled person (a man) to throw their support behind a woman and servants (female servants for that matter) and poor laborers during that period of time? It's all rather wonderful, but also rather improbable. I didn't buy it for a minute.

I really enjoyed Theo's character growth as he went from a superficial young man to a man who took his future responsibilities seriously. The lack of character shown when he agreed to Martha's proposition was immense! So yes, wonderful character growth there for Theo, particularly compared to the incremental and murkier character growth shown for Martha.

A Lady Awakened turned out to be a mixed bag. I loved sections of this book because it is so different (I like different), but not all of it worked for me. The good thing? I will read the next book in the series. :)