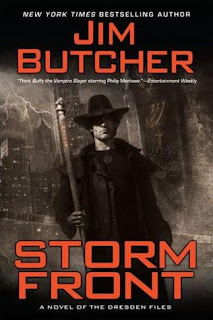 I've become familiar with Jim Butcher's Harry Dresden character, first through the long-defunct and short-lived television show featuring this character, and more recently by reading a few short stories in anthologies. Long ago, I decided to read this series and purchased the first book Storm Front. Unfortunately, the book has lingered in my TBR pile for years. Finally, this month I found that the theme for TBR Challenge -- other genre besides romance -- was the perfect way to plunge into this series.

Harry is a real wizard, and no he's no Harry Potter. He's the only wizard in Chicago who practices openly and uses his magic to make a living, going as far as opening a P.I. agency and working as a consultant for the Chicago P.D. whenever they encounter "out of the box" crimes -- not that he makes much money out of either of these endeavors.

When we first meet Harry he's at his office reading novels, broke and hoping the phone will ring and a new case will come his way so he can pay the past due rent. He gets his phone call from a woman who needs her missing husband found, but barely talks her into meeting him at the office. Then he immediately receives another phone call from Detective Karrin Murphy of the Chicago P.D. to consult on a horrifying double murder that just stinks of black magic.

Soon Harry is embroiled in an investigation where people that talk to Harry begin to die, infamous Crime boss Johnny Marcone gets involved, a demon almost demolishes him while he's on a date, and a giant scorpion almost does him in, but worse than that as Harry gets closer to an answer the powerful black wizard behind the murders focuses on him, and he knows Harry's name so that his life is surely in terrible danger. But poor Harry also has to watch his back as a White Council representative spying on him believes that Harry himself is culpable and capable of the murders. Harry has to solve this case to save his own life even if he has to lie to Detective Murphy and experiment just a little with black magic to do it.

I felt a bit sorry for lonely, clumsy, inadequate Harry Dresden in this first installment of the series. I like Harry with his wonderful narrative voice. His inadequacies when dealing with women and even as a wizard manage to be both amusing and endearing. Harry is supposed to be a great wizard, yet his potions come from assistant Bob (a oversexed spirit living in a skull), half of the time he forgets his magic staff, weapon, and other magical paraphernalia, so that when most needed he is not prepared, but Harry has guts and somehow gets out of tight situations. Most people avoid looking Harry in the eye because he can see into their souls. I found this "soul gazing" aspect of Harry's powers fascinating and hope to see it further developed in future books. He is ambivalent about his own nature when it comes to dark and white magic and resentful of wizards in the White Council for whom he sacrificed much and was punished.

This book introduces some very interesting secondary characters: Detective Karrin Murphy and Johnny Marcone are two great examples. Harry has a strong narrative voice full of dry humor but not too much sarcasm, and I really enjoy the fact that Harry doesn't hide his magic in a world where humans are not really aware of a hidden magic world. It's an interesting concept.

Storm Front did not blow me out of the water, but I think it is a solid introduction to the series and Harry Dresden quite interesting as central character and narrator  -- more detective than great wizard. I like that the series begins with an investigation but love that it also delves into Harry's internal struggles and insecurities as a character.

After reading Storm Front, I purchased the second book of the series, Full Moon. So, I will definitely continue reading this series. :)