Review: The Secret of Othello: A Fisher Key Adventure by Sam Cameron 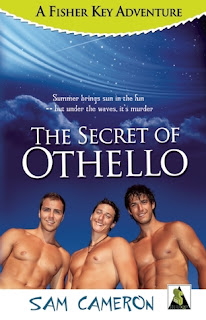 Last year I read Mystery of the Tempest: A Fisher Key Adventure and enjoyed it. That book was the first installment in Sam Cameron's young adult LGBT mystery series Fisher Key Adventures. I've also enjoyed related and unrelated short stories written by this author, so of course I purchased the second book, The Secret of Othello as soon as it released. The series stars the Anderson twins, Denny and Steven, and I think what I love about these eighteen year old young men is how Cameron balances out each character by highlighting their common ground, yet gives them unique, individual traits and personalities.

Denny is gay and more circumspect about his heroic actions with an almost shy personality, and Steven loves girls and is known as the outspoken twin with the cocky attitude. Yet they share many of the same interests including love and respect for family and the sea, a propensity to find trouble in the most unimaginable of places and a curiosity that leads them to solve mysteries. However, being teenagers, they also share some of the same concerns and struggle by making wrong decisions and looking for the right choices.

While Mystery of The Tempest was very much a mystery that introduced these wonderful characters, Sam Cameron uses The Secret of Othello more as a tool to further develops these characters by focusing on the boys' concerns about changes taking place and affecting their lives after high school graduation.

After the mess he made out of his love life during graduation, Steven has given up girls for the summer, but has to fight himself constantly not to break this personal promise when three local girls make a play for him, and a new girl visiting Fisher Key makes an impact.This is not an easy task for impulsive, easily distracted Steven with his high libido. Instead after witnessing a shooting star streaking across Fisher Key skies, he tries to distract himself by following his natural curiosity after NASA scientists claim a weather satellite fell in the ocean. Steven doesn't really believe it's a weather satellite and keeps his eye on the Othello II reclaiming vessel and its crew, particularly on the beautiful female scientist aboard. However, Steven's real conflicts in this second installment are internal, as his future with the SEALs is still uncertain.

In the meantime, Denny is not really interested in NASA or their satellite and leaves all the snooping and speculating to Steven. Instead Denny's whole summer is consumed by his new relationship with boyfriend Brian. Denny is still hoping not to be the only virgin arriving for training at the U.S. Coast Guard, but he's also struggling with adjustments and choices, especially since he is only partially out of the closet. Brian is not so understanding of Denny's needs, and Denny doesn't always make the right decisions when it comes to their relationship. Additionally, Denny deals with the Cuban side of the family and going by his Aunt Riza's homophobic and intractable attitude that might end up a disaster. It all becomes a balancing act for Denny between family acceptance, Brian's understanding, mistakes, and his own libido gone wild! The boys end up helping each other out as always, and Brian confronts his own tough situations. There is a lot of growing up for Denny and Steven, as well as Brian in this installment.

The Secret of Othello is a good follow up to Mystery of The Tempest. It delves more into the characters and although there is a mystery to be solved, and of course Steven, Denny, Brian, and their friend Sean are all involved, in the end that mystery is not central but more of a side story through much of the book. However, toward the last third of the book the mystery and action pick up and the ending is quite exciting.

Sam Cameron writes young adult stories for young adults, although as an adult for me they are also enjoyable. The Fisher Key Adventures in particular are wonderful because not only is ethnic diversity subtly and naturally weaved into the series, but there is also the inclusion of inner struggles faced by young adults of different gender and sexual orientation. Cameron achieves this while placing these young adults in situations that include family, friends, and community in an organic environment, all while making these books highly entertaining mystery reads. The Secret of Othello was a solid read for me, and now I look forward to reading the next book of the series, The Missing Juliet.

Note: Have you noticed that so far the titles refer to vessels and they're all Shakespearean in nature? :D

Series - My reviews:
Mystery of the Tempest, #1
Bark If You Like Bad Boys #1.5 (Boys of Summer Anthology ed. by Steve Berman)
The Secret of Othello, Book #2

*Also, check out Ames' review of Mystery of the Tempest at The Book Scoop YA Blog.
Posted by Hilcia at 12:55 PM