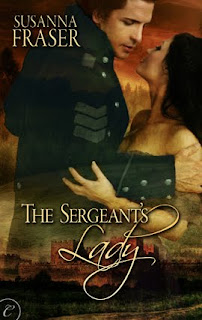 Highborn Anna Arrington has been following the drum, obeying the wishes of her cold, controlling cavalry officer husband. When he dies, all she wants is to leave life with Wellington’s army in Spain behind her and go home to her family’s castle in Scotland.

Sergeant Will Atkins ran away from home to join the army in a fit of boyish enthusiasm. He is a natural born soldier, popular with officers and men alike, uncommonly brave and chivalrous, and educated and well-read despite his common birth.

As Anna journeys home with a convoy of wounded soldiers, she forms an unlikely friendship with Will. When the convoy is ambushed and their fellow soldiers captured, they become fugitives together. The attraction between them is strong, but even if they can escape the threat of death at the hands of the French, is love strong enough to bridge the gap between a viscount’s daughter and an innkeeper’s son?

I loved the story of Anna and Will. The setting in Spain during the war with the French was rich with details and Fraser caught the atmosphere by depicting the harsh reality of war and transporting the reader to those moments in time. Even later when Anna returns to England, through this character and those she meets, the reader experiences a different place -- a place where its people are still dealing with the ravages of war and loss.

Anna "follows the drum," and an abusive and controlling husband who serves in Wellington's army in Spain. After he dies she decides to go home, but while on her way Anna is thrown together with Sergeant Will Atkins, a brave, kind soldier who saves her life after their convoy is captured by the French. The two become fugitives and while on the run, their attraction grows and the two embark on a secret love affair that turns into more. Unfortunately she is highborn and he's of common birth, and neither can see a way to surmount this obstacle.

Will and Anna are excellent protagonists. He is the self-educated son of a country innkeeper and she is the daughter of a viscount who made his fortune in India. Society keeps them apart, as he is poor and can't even afford to buy an officer's commission, and she is a wealthy heiress and widow. I loved both of them as central characters. Anna who performed her duty, paid a high price during a cold and abusive marriage, but still recognized a good man and had so much love to give. She's a character that just grew and grew throughout this two-book series. And then there's Will... talk about love and romance! I loved him.

In The Sergeant's Lady the emotional connection between the two main characters was there from the beginning and it pulled at me to the end. There's also passion, tenderness and love. Plus my goodness... there's the desperation of two people who have all those feelings and know they can't have each other! The writing is beautiful and between that, the story, characterization, setting and atmosphere I couldn't stop reading this story from beginning to end.

The end was a bit rushed in my opinion, and there were a couple of things I wanted to know about Anna and Will at the end that were not clarified. However, that's small potatoes compared to how much I enjoyed the rest of this book. Beautiful, this was a beautiful historical romance.

Visit Susanna Fraser here.
Posted by Hilcia at 7:58 AM