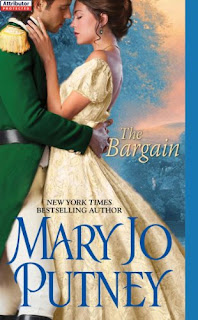 Mismatched lovers and unexpected attraction catch fire in this timeless novel by the New York Times bestselling author and legend in historical romance Mary Jo Putney. . .
Forced to wed to keep her inheritance, independent Lady Jocelyn Kendal finds an outrageous solution: she proposes marriage to Major David Lancaster, an officer dying from his Waterloo wounds. In return for making her his wife, she will provide for his governess sister. But after the bargain is struck and the marriage is made, the major makes a shocking, miraculous recovery. Though they agree to an annulment, such matters take time. . .time enough for David to realize he is irrevocably in love with his wife.

Haunted by her past, Jocelyn refuses to trust the desire David ignites in her. She never counted on a real husband, least of all one who would entice her to be a real wife. But some bargains are made to be broken--and his skilled courtship is impossible to resist. . .

The Bargain by Mary Jo Putney is the re-release of a book originally released in 1989 under the title The Would be Widow.

Jocelyn Kendal must marry immediately in order to keep her inheritance and independence. Major David Lancaster is slowly dying in a hospital ward from wounds received at Waterloo and is concerned about his young sister's future. Jocelyn makes a shocking proposal to David, if he marries her so she can keep her inheritance, she will endow his sister and take care of her after his imminent death. He accepts the bargain.  However after a miraculous recovery from his wounds the bargain becomes a problem for both of them. David finds himself falling in love with his wife and begins a courtship, while Jocelyn refuses to acknowledge there is more than just friendship between them.

There's more to this story though. From the beginning Jocelyn had her eye on the Duke of Canover as the man who would be her future husband and/or lover, but since time was running out and she could not bring him up to scratch, she settled for David instead. The Duke of Canover only makes a few appearances, but it is Jocelyn's musings and the decisions she makes involving him that affected this story for me. In many ways, her deepest thoughts are about him and not David. Jocelyn spent so much time avoiding her feelings for David that this reader never really made that emotional connection between them, at least from her side, until almost the end of the story. David's feelings for Jocelyn are quite palpable throughout.

Jocelyn also comes off as a cold and rather calculating woman toward the beginning of the book, and frankly it took a while before I even liked her as a character. However, Putney develops Jocelyn and as the real woman emerges there is warmth and character growth by the end of the story.

And what of the secondary characters? There's Sally, David's sister, who plays a major role in this romance and ends up having her own secondary romance in the story. I loved her personality, loyalty and inner strength, as well as her romance with the talented doctor Ian Kinlock.

Although The Bargain is not my favorite historical romance by Mary Jo Putney, there are still parts of it to admire. I liked the way Putney made me reconsider both Jocelyn and Sally's characters after an iffy beginning, and David is an admirable character from beginning to end. I love the secondary characters in this book, from the footman who gets to bring his brother home from the hospital to recover from war wounds, to Sally and Ian's romance. And after all that, I ended up rather intrigued by the Duke of Candover's character at the end.

Visit Mary Jo Putney here.
Posted by Hilcia at 8:39 AM