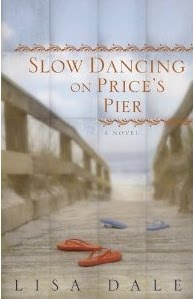 A family learns that time can erase mistakes when the heart remains true- from a refreshing new storyteller.

Lisa Dale always seems to surprise me. There's something about her books that seem to touch me in one way or another, it's that writing style of hers that does it every time.

Each chapter of Slow Dancing on Price's Pier begins with Thea's newspaper column From "The Coffee Diaries" by Thea Celik. In this one page column Thea explores the history of coffee, but of course there's more there as each gorgeous little story applies to her life and to that of those around her. I love the way Dale uses them in conjunction with the story. 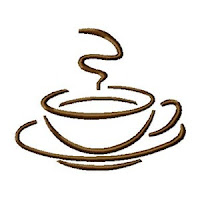 "It's fire that forces the transformation from seed to bean. Roasting alters the seed's makeup -- an intense molecular restructuring.

In that way, I think coffee cherries aren't much different from people. Heat and pressure change us. When we walk through fire -- and we all do at some point -- we come out the other side to find ourselves altered. If we're lucky, we become richer, more complex, more alluring people because of our trials. But sometimes, we just get burned."

Slow Dancing on Price's Pier is a complex story of friendship and love that involves one woman, two brothers, and a family. It's a triangle that begins when the three are carefree and young and ends years later after their great friendship has been interrupted by competition, jealousy, wrong choices, misunderstandings and yes... love.

The story begins with Thea and Jonathan's separation after years of marriage. The news comes as a shock to his family, friends and to everyone on Price's Pier where Thea runs her beloved coffee shop. Unbeknown to everyone, Jonathan cheated on their marriage, yet he refuses to talk to Thea, see her, or to pick up his own daughter for the weekend. Instead, Jonathan sends his brother Garrett to take care of his responsibilities.

Garrett and Thea have not seen or talked to each in fifteen years, since Thea married Jonathan. He hates her, doesn't want her as part of his family and makes no bones about it. But Garrett finally has a chance to reconcile with his brother now that Jonathan is divorcing Thea, so he'll do whatever is necessary for his brother and agrees to play go-between. He even gives Jonathan a divorce party, here's his toast:


"Sometimes a man has to take the long way to find out a woman isn't who he thought she was. You know what they say. It's hard for a man to lose a woman. Sometimes, it's damn near impossible. Believe me, I've tried. "

"Jeez, Garrett." One of his friends cut in. "Whose divorce party is this anyway."

Garrett and Thea's meeting is a tough one. He's hostile and shocked to finally see her again... she's just shocked to see him, to feel his hostility and just wants him to go away. Thea doesn't want to lose the only family she has left in the country -- Garrett and Jonathan's family -- especially as her own parents are back in Turkey, and she's afraid that this is the end of that relationship. Garrett is honest with Thea about the fact that he doesn't want her to be a part of his family any longer and acts the ass with Thea. But... but... there is such history there! As Dale begins to slowly unravel their story, the reader discovers that there are such strong emotions and more than enough reasons behind all these initial uncomfortable actions.

Thea on decaffeinated coffee and Jonathan:


Serious coffee drinkers know the importance of decaf coffee when it comes to round-the-clock consumption....Whatever the method of decaffeination, most decaf coffees still contain some small amounts of caffeine. There's just no way to get rid of it completely. Nature insists.

Garrett and Jonathan met Thea when they moved to Newport, Rhode Island as teenage boys. Their friendship was deep and meaningful while it was on equal terms and they balanced each other's weaknesses and strengths. Garrett was the star athlete who loved to take risks while Jonathan was studious and methodical, but Thea was a bit of both. She stepped in between the brothers and became the much needed balance. Unfortunately after Jonathan graduated and went away to college and Garrett was a senior in high school, Thea and Garrett fell in love and the dynamics changed between the three friends. The circumstances and choices made by these three young people changed their lives in ways that affected them for the long haul.

Thea on a real cup of coffee and Garrett:


"The fact is, there's nothing in the world like a good cup of smooth, dark coffee -- but as with so many things, sometimes it takes a substitute to make you appreciate the real thing."

What did I like about this book? Well, I don't like triangles because I tend to like one man (or woman), and really dislike the other. I thought it would bother me that the triangle includes brothers, but in the end it didn't make a difference and it didn't bother me at all. In the beginning this story was tough because Jonathan didn't seem to have any backbone as he didn't take responsibility for his actions, and Garrett despite his confused thoughts, was quite hostile toward Thea. Thea herself seemed to be more concerned about keeping Jonathan's family at any cost than about her own personal happiness.

However, as Dale unravels the story (and yes she uses flashbacks a few of times), everything falls into place and there's an understanding of the characters and their human actions and reactions. Particularly if you take their youth into consideration. Their present actions and reactions, on the other hand, are a different matter. Although the reactions by the adults are still human and flawed, I thought at times they also came off as immature. Jonathan and his family seem to me to be pretty selfish in many ways, just as Thea seemed to be too darn accommodating.

But did I enjoy the romance? Yes, I did. I loved that the emotions between Garrett and Thea felt real -- especially those coming from Garrett. Weather it was hostility, contempt, passion or love, Garrett's emotions oozed out of him. It's true that Thea compromised her feelings, but what they all did was hide from reality. Frankly by the end of this story I liked both characters and really enjoyed their story.

Slow Dancing on Price's Pier is a family drama by Ms. Dale full of memorable characters and situations, as well as a memorable romance. I continue to enjoy her prose, and particularly the way she balances out (what I think of as) this fusion between women's fiction and contemporary romance. It just seems to get better with every book she writes. I look forward to reading her next book and hope we don't have too long a wait before that next release.

Other books by Lisa Dale:
Simple Wishes
It Happened One Night
Posted by Hilcia at 1:15 PM