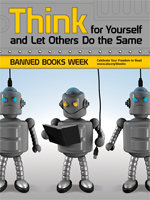 It's National Banned Books Week (September 25 - October 2, 2010). This is a subject that resonates with me personally. I was born and until age 12 lived in a society where books were (and still are) heavily censored. So as a young adult, and to this day, having the freedom to pick up a book, any book, of my own choosing that focuses on subjects both orthodox and unorthodox, is a joy. It is a right that I value highly, treasure daily and one that I want my children and grandchildren to have in the future.

The American Library Association put together lists of the Top 100 Challenged books by decade for 1990-1999 and 2000-2009, plus the Banned Classics List. After going through all three lists, I noticed that although I haven't read many of the titles in the first two lists noted, I have read about half of the books included in the Banned Classics List, and still own most of them.

I couldn't help but notice that even in the 2000-2009 list, classics that influenced my younger years were included: To Kill a Mockingbird by Harper Lee, Of Mice and Men by John Steinbeck, Farenheit 451 by Ray Bradbury, and a book that I re-read this month and discussed in one of my weekly reads posts, A Separate Peace by John Knowles. They even include some later titles that I still love and own such as The House of the Spirits by Isabel Allende and Snow Falling on Cedars by David Guterson. Of course these stories might not be for everyone, but they are valuable to many including me.

I've had Rainbow Boys by Alex Sanchez on my list of books to buy and read for a while, but didn't realize it was also on a list of Banned/Challenged books. What about you? Have you read any of the books included on these lists? Do you make a point of reading banned books?

Check out posts on National Banned Books Week at Lurv a la Mode and Leslie's Psyche.
Posted by Hilcia at 3:04 PM