Review: A Little More Scandal (The Christies #1.5) by Carrie Lofty 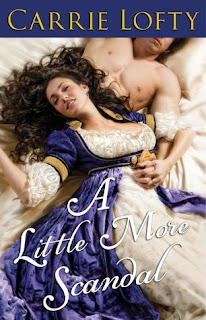 Self-made industrialist Sir William Christie tempts the scorn of London society by attempting to seduce Catrin Jones, a modest but opinionated battlefield nurse who earned notoriety after surviving a naval shipwreck. His ambition to secure her exclusive story is part of his latest business plan, while her intention is to marry well before her moment of fame expires. With respectability, wealth, and security at stake, they must decide whether love is worth embracing just a little more scandal...

In a very short period of time Carrie Lofty has become a favorite historical romance writer and her books 'must reads' for me. Ms. Lofty has the touch when it comes to penning passionate romances that combine wonderful characters with those little historical details that I love.

A Little More Scandal is a 90 page novella that can be read as a stand alone or as a prequel to Carrie Lofty's The Christies historical romance series. As a prequel, this passionate romance gives the reader insight into Sir William Christie's character, the patriarch of the family, and adds depth to The Christies' series as a whole.

Sir William Christie is a self-made man who clawed his way from the bottom rungs of Glasgow's society's ladder and gained entrance, if not necessarily acceptance, to the very top of London's ton by using his gift for business and obsession for making money. At 31 years of age, he's a widower, an absentee father, and the head of a successful industrial empire. He is a ruthless businessman who is about to find his match in the most unlikely of women.

Catrin Jones is the Welsh daughter of a country pastor who served as a battlefield nurse for five years in the Crimean War. Her only claim to fame is that she was the only survivor when the HMS Honoria was wrecked while sailing home from the war and Catrin refuses to tell the real story. London is agog with speculation and William needs her story in order to further his latest business plans. William decides to seduce the story out of Catrin, but he doesn't expect that Catrin might have her own plans and might seduce more out of him.

This novella is character driven and as a result the focus is entirely on William and Catrin. There is a sense of urgency to William and Catrin's developing relationship, dictated by events taking place around them, that serves to push them into quick action. Catrin, more so than William, is an absolute gem of a character in this novella. She is forthright and just as ruthless in her own way as William when it comes to achieving her goal. I admired her for her determination. Together, they sizzle and burn. . . sizzle and burn. . .

As previously stated, A Little More Scandal can be read as a stand alone novella since this is a prequel and already known characters from this series do not make an appearance. However, if you've read Flawless, this short is a 'must' read. Lofty delivers all around in this passionate little novella and gives readers a detailed peek into what drove both William and Catrin to build not only an industrial empire, but a beautiful and rather unique family. Of course this novella is a delicious appetizer, but now I am eagerly waiting for the main course, the second book in the series, Starlight (The Christies, #2). 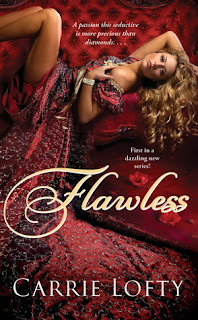