Surrendering to the Sheriff (Sweetwater Ranch #7) by Delores Fossen 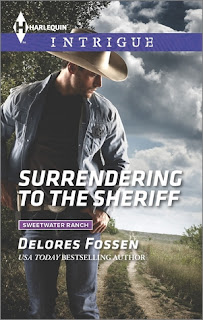 Surrendering to the Sheriff by Delores Fossen is the 7th installment of an ongoing Harlequin Intrigue series. I have not read the rest of the books, however, it wasn't too tough for me to follow the mystery driving the overall story arc, or the relationships between all the different characters. Fossen explains the situation with enough detail to satisfy.

There is bad blood between the Braddocks and O'Neals, a sort of feud that began when Whitt Braddock was murdered twenty-three years ago and his mistress, Jewell became the suspect. Now there is proof that may convict Jewell of the murder. In Surrendering to the Sheriff, Whitt's son, County Sheriff Aiden Braddock, and Jewell's half-sister, Kendall O'Neal, become the target of unknown hired goons/kidnappers attempting to force Aiden to destroy evidence against Jewell.

This romance suspense is highly dramatic with a soap opera style that had me hooked from the beginning. Let me give you an example from the first chapter:


Kendall opened her mouth. Closed it. Then swallowed hard. "I thought Laine might have said something."

Aiden shook his head. "My Sister? What does she have to do with this?"

"Laine saw me coming out of the doctor's office. I swear Aiden, I was going to leave town next week. I wasn't going to put any of this on you. I know how you and your family feel about me."

There was a gun trained on him, but Aiden went some steps closer so he could look Kendall straight in the eye. "What the heck are you talking about?"

She made a sound. Sort of a helpless moan that came from deep within her chest. "They took me because I'm pregnant. Because they knew they could use that for leverage."

Kendall's breath shuddered. "Aiden, the baby I'm carrying is yours."

In that scene, I visualized an imaginary camera close up of a surprised Aiden trying to play it cool and imagined dramatic music soaring. In case you want to know, Kendall is pregnant with Aiden's child after a night of drunken sex when the two finally give in to a twenty-three year old attraction.

Aiden and Kendall go through different scenarios with would-be kidnappers, investigating, finding and dismissing suspects, with both Aiden and Kendall saving each other repeatedly before everything is resolved. The close contact between the couple brings them together and a resolution to their romance is found by the end.

There are quite a few shoot out scenes and Fossen keeps the "intrigue" going by throwing in false but viable trails until the very end. I was definitely entertained by all the action as well as the dramatic soap-opera secrets that kept popping out of the woodwork. The action and family drama overshadows the lukewarm romance. For some reason, I expected less control and more unbridled passion from this couple after all those years of waiting. Truth be told, Aiden and Kendall have much to deal with in their personal lives, including some psycho family members. He is a 'baby daddy' looking forward to becoming a father and wants to be part of his child's life. He lusts after Kendall, but there is a personal element of surprise, a rather passionless one at that, when it comes to love and commitment to a serious relationship. Kendall, on the other hand, has been in love with Aiden since they were teenagers and has fantasized about their being together for 23 years. To be fair, the family feud and bad blood is a mood killer.

This Harlequin Intrigue felt meaty and a much longer book than its 216 pages. I enjoyed the high-drama and soap opera factors, the suspense became much more intriguing to me than the romance. However, I did like the main characters: Aiden as an honest man who takes his responsibilities seriously, and particularly Kendall as a heroine who needs to be protected but doesn't sit around waiting to be saved, instead becoming proactive in dangerous situations. Grade B-