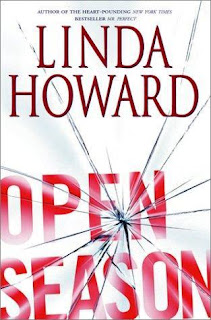 Be careful what you wish for....

On her thirty-fourth birthday, Daisy Minor decides to make over her entire life. The small-town librarian has had it with her boring clothes, her ordinary looks, and nearly a decade without so much as a date. It's time to get a life -- and a sex life. The perennial good girl, Daisy transforms herself into a party girl extraordinaire -- dancing the night away at clubs, laughing and flirting with abandon -- and she's declared open season for manhunting. But her free-spirited fun turns to shattering danger when she witnesses something she shouldn't -- and becomes the target of a killer. Now, before she can meet the one man who can share her life, first she may need him to save it.

Seamlessly blending heart-pounding romance and breathless intrigue, Linda Howard delivers a stylish and provocative novel that absolutely defies readers to put it down.

I've been wanting to read Open Season for a long time. Don't ask me why I never picked it up, I usually end up loving Linda Howard's books and Open Season is no exception. A romance between the small-town librarian and the Chief of Police? What's not to like? And a romance it is. Open Season is categorized as a romance suspense, however because the suspense is not substantial and there's no real mystery, this book is really what I think of as a thinly disguised romance where the suspense serves to drive the romance. So let's talk about what constitutes the meat of the story.

Daisy Minor is what people think of as a "typical" small-town librarian. Well-respected but overlooked by all, Daisy lives with her elderly mother and aunt. She pretty much acts like an old fashioned naive spinster from another era and dresses the part. On her thirty-fourth birthday Daisy decides she's had it with being a "good girl" and makes major changes in her life. A makeover and some shopping are a good beginning and moving to her own apartment helps, but her answer to finding a man is to hunt one down at nightclubs by becoming a party girl. This leads Daisy into trouble when she inadvertently witnesses a murder and becomes the killer's target.

Jack Russo was a big city cop and SWAT officer in both Chicago and New York City, but after his divorce and the death of his aunt exchanged that life to be the Chief of Police in the small town of Hillsboro, Alabama. He runs a clean, dry town and the last thing he expects is big trouble, murder or to become helplessly attracted to the town's prissy and naive librarian. But that's just what happens to Jack.

Daisy is looking for a man, but Jack is not her type: he's an outsider and too muscular/fit for her. Jack is not looking for a woman, and although Daisy's eyes and smile are truly attractive, she's not his type: she's too prissy and conservative for him. But as Daisy undergoes her makeover and gets in the way of Jack's ongoing investigation in the nightclubs, he can't help but feel protective and more attracted to her, and the more she tells Jack he's not her kind of man the more he gets on her way. Their physical attraction grows and whether she likes it or not slowly but surely Jack becomes her man.

Oh Lord! There are such great scenes in this book between Daisy and Jack. Under the guise of protecting Daisy, Jack basically seduces her, and she helps along by spilling the beans to her family and the whole town. I mean almost everybody has an idea of what's going on between Daisy and Jack even before they do! And while there's sexual tension and their bedroom scenes are super hot, others are fun and hilarious. Just read the PartyPak condom scenes, there are two of them. The discussion that follows had me laughing, and I mean out loud! Those two didn't know when to stop!

The suspense involves sexual slavery and transporting females illegally from foreign countries for that purpose, date rape drugs are used to subdue the women and one man is using the drugs on local women at the nightclubs. There's no mystery as to who is involved in the crimes, so this becomes more of a police procedural (how Jack and company figure out the truth), and of course keeping Daisy safe from the killers. The resolution to all of these threads is a bit surprising, but not really dramatic.

On the other hand, the romance is very satisfying. This romance grows from prickly dislike between Jack and Daisy, to a sort of friendship, some pretty hot and steamy scenes because they can't keep their hands off of each other and on to love. I loved their dialogue throughout the story, particularly how Jack went out of his way to rile and tease Daisy, and his attempts to play down jealousy and protectiveness when other males came into the picture. I loved that Daisy found her man and happiness, but the real Daisy didn't change... much. Open Season was a surprise because as a romance suspense it turned out to be a fun and very enjoyable romance with a suspense plot that just happened to be part of that romance.

Find out more about Linda Howard here.
Posted by Hilcia at 7:55 PM