... On my current read: The Demon's Librarian by Lilith Saintcrow 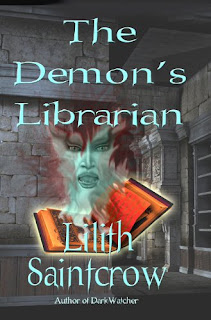 I'm currently reading Lilith Saintcrow's The Demon's Librarian. I've had this book in my TBB list since 2009 and became interested in reading it again after reading her novella in the Dark and Stormy Knights anthology last year. Oh well... I do get to the books on my lists sooner or later.

Anyway, I couldn't help but come back here to share a couple of snippets with you all. Chess, the Jericho City Public Library's head librarian, had me in stitches throughout the beginning of the book with her personal ruminations about her joys and frustrations.

With libraries closing left and right around the country at this very moment, this first quote (from a book published in 2009) is the first one that caught my eye:


While the good citizens of Jericho City would pay
thousands yearly for plastic surgery and to pad the pockets of
the mayor's friends, they simply would not vote a couple of
measly bucks onto their property taxes to take care of her
library. Lovely. Remind me to spit in a city councilman's
coffee cup the first chance I get. Page 4

And after killing the demon, this one made me laugh because yeah... it just sounds so easy in the books, but imagine how tough it would be in reality. Plus, that last line! The bold lettering is from me:


She coughed and gagged again, trying not to lose
everything she'd ever thought of eating in the last week. The
books always make this stuff sound so goddamn easy. They
don't mention the smell. Or the way getting hit in the face
with a tentacle as big around as your thigh hurts. Her eye
was puffing closed, she could feel it throbbing and swelling to
almost the size of a baseball.

Chess swallowed dryly, pleading with her stomach to stay
down. The smell of garbage coated the back of her throat,
and she probably had gotten some of the slimy water in her
mouth. I don't think it's good for my image to blow chunks all
over a ... what's this thing called again? Either a skornac or
just plain Demon-With-Many-Arms. Particularly allergic to a
fire-consecrated demon-hunter's knife. One more case where
an ounce of research is worth a pound of "oh fuck." Page 5


"Won't you sit down, Mrs. Pembroke?" Chess inquired
sweetly. "It's so good to see you. May I offer you a cup of
tea?" Or a face-to-face with a tentacled demon in the sewers?
I think that would be just up your alley, Pem.

Pembroke clutched her small purse to her solar plexus as if
strangling a small pet dog against her cardigan. "No ... no
tea." She sounded shocked. Relations between Chess and the
Indignant had been icily polite ever since the great Barbara
Cartland fiasco, with no détente in sight.

After dealing with an octopus-looking demon, Pembroke
the Indignant didn't rattle Chess nearly as much. Page 14

I've always been envious of librarians... working with all those books on a daily basis. *sigh* Of course, Chess is not your everyday librarian since she's out fighting demons, but I'm enjoying this aspect of her character.
Posted by Hilcia at 12:58 PM