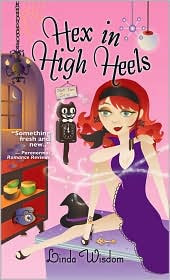 Feisty witch Blair Fitzpatrick has had a crush on hunky carpenter Jake Harrison forever - he's one hot shape-shifter. Just when Blair thinks the relationship is really starting to sizzle, Jake pulls back -- the last thing he wants to do is involve Blair in his dysfunctional family dynamics.
Jake's nasty mother and brother are after him to return to his pack, and a bunch of unruly elves start causing all kinds of chaos. Blair is trying hard not to unleash the ultimate revenge spell, but when Jake's enemies try to force him away from her, Blair is pushed over the edge. No one messes with her boyfriend-to-be, even if he does shed on the furniture!

This is my first book by Linda Wisdom. The first few pages were slightly confusing as the characters were not familiar. However, I quickly picked up on the story and was able to follow without a problem.
Hex in High Heels is the fourth installment in Linda Wisdom's light paranormal romance series. This is Blair and Jake's story. Blair is one of 13 witches who in 1313 were expelled and banished to the mortal world from the Witches Academy for breaking rules, as set by the Witches Council.
I really liked Blair in this story. She is irrepressibly fun, sexy and energetic with a temper and poor self-control. She runs the local vintage shop Blast from the Past where she sells crafts and revenge spells to Moonstone Lake residents. Revenge spells are her gift and having a temper and poor self-control can become a problem as you can only imagine -- especially when she's supposed to be staying within those rules set by the Witches Council. Blair has a major crush on her hunky friend and local carpenter Jake, and is determined to have him. It seems when Blair wants something she gets it.
Jake has the hots for Blair, no question about it, but his life is complicated and he has secrets. In the last installment it was revealed that he is more than just a carpenter and all-around great handyman, he is also a Were Border collie or a canis lupus familiaris. It's a good thing Jake had a great sense of humor because dog jokes and references abound in this story. His great sense of humor, understanding and appreciation of Blair's 'hexy' ways makes him perfect for her -- but just when he might make a move, his hateful mother, arrogant brother and the Pack he willingly left behind years ago, want him back.
Jake's past sets up the main conflict in the book. Blair and Jake with help from Stasi, Trev and the townsfolk of Moonstone Lake must deal with a bunch of dirty, unruly elves and the leftover consequences of Jake's secret past. Throw into the mix horny Horace the Gargoyle, Felix the Kit-Kat talking clock, a pair of ghosts, and Fluff and Puff, Jazz' bunny slippers, and we have more than enough great characters running around this story to keep the entertaining factor high.
This is not your typical gloom and doom paranormal romance where great evil looms at all times. Blair and her witch friends deal with, and help people around them who have very real problems. I like the humor and light witchy way in which they resolve the conflicts that crop up. Blair and Jake's humorous dialogue and sizzling chemistry made them a fun, sexy couple I enjoyed.
Hex in High Heels was an enjoyable, light paranormal romance. I found it to be both sexy and entertaining, a fast paced, quick read, packed with fun characters and situations.
Released October 1, 2009
Review based on ARC copy from Sourcebooks. You can visit Linda Wisdom here.
Other books in this series:
50 Ways to Hex Your Lover
Hex Appeal
Wicked by Any Other Name
Originally posted at Musings of a Bibliophile October 1, 2009
Posted by Hilcia at 5:53 PM

Email ThisBlogThis!Share to TwitterShare to FacebookShare to Pinterest
Labels: 2009, Grade B, Linda Wisdom, Musings of a Bibliophile, Paranormal Romance, Reviews