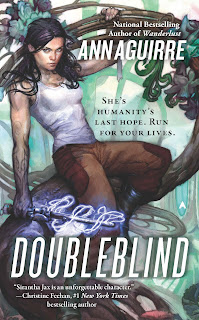 As a "Jumper" who navigates ships through grimspace, Sirantha Jax is used to kicking ass. So why is she suddenly chosen as an ambassador of peace?

Ah, Jax. I've been anticipating Doubleblind's release impatiently for a year. Wanted, needed that Jax fix. I'm afraid I didn't really get it, at least not the fix I was anticipating.
I'm not going to go into too many details about this book since it's the third book in the series already. A quick recap... Jax has been assigned to Ithiss-Tor as ambassador representing the Conglomerate. They need the Ithtorians to fight the Morguts, an alien race humans cannot fight alone. Meanwhile, "mommy dearest" --Jax's mother -- who is the head of the Syndicate is doing everything she can to disrupt Jax's negotiations and making a power play against the Conglomerate through a publicity campaign.
Doubleblind, the third installment in the terrific Jax Sci-fi/Fantasy series by Ann Aguirre, was a totally different kettle of fish from both Grimspace and Wanderlust. Both those books were fast paced and so full of great action and characters my head was left spinning at times. Not so this book.
This book slows down the pace and Ms. Aguirre gives us three quarters of a book full of political intrigue and creative world building. The whole story takes place in Ithiss-Tor, Velith's home planet, where Jax has been sent as ambassador to gain the Ithtorians as allies. The world building was not only tight but excellent. Ms Aguirre weaves in some amazing cultural, environmental and physical details into the Ithtorian world that I found fascinating and it is what made this book stand out for me.
Velith's character development was also worth waiting for. Finding out more about him personally, where he comes from and what happened in his past was fascinating. And yes, I'm still in love with him. I think his is the one character I most enjoyed, along with some of the secondary Bug characters. On the other hand, Jax's crew was really missing in action in this book. Their wonderful dialogue, witty give and take and overall contribution were not only missing but sorely missed in Doubleblind.
I also missed Jax -- the real Jax -- we only get a glimpse of her in the last third of the book. The rest of the time, she comes off as this woman who is trying very hard to be perfect and who is so radically changed from our dear, chaotic Jax, I almost didn't recognize her. She was wonderful! Amazing! An incredible politician! She was... not Jax. Character growth? Maybe. But that radically different? That much of a change? Hmm... Chip induced behavior? Maybe those many perfect poetic wa...s were. But the rest? No. Not unless that chip stopped working toward the end of the book. Her behavior was just so different, I didn't quite buy it. Jax's relationship with March and his psychological situation in this story were tough to resolve and I thought Ms. Aguirre was quite creative in reaching the solution there.
Doubleblind was not my favorite book in the series so far, although I really enjoyed some parts of it. Even the end of the book seemed predictable and easily resolved and not what I've come to expect after the previous installments. But with the plot thickening... I'm expecting this crew to get some real action in the future, and who knows what Jax will do next? I'm still looking forward to that next book and my Jax fix!
You can visit Ann Aguirre here.

Series:
Grimspace
Wanderlust
Doubleblind
Posted by Hilcia at 7:49 AM