Update + South of the Border, West of the Sun by Haruki Murakami

Wow, it has been a whole week since I posted. Let's dust off my little blog.

I read up a storm during the month of April (25 books), but only reviewed one book. This is what happened. First, I basically spent every single minute of my spare time reading instead of blogging. Second, I joined Scribd two months ago and took advantage of my first free month and first month and decided to become a paid subscriber ($8.99 per month). Needless to say I went nuts reading backlist books and/or old releases, or complete series I've been wanting to get to. Hmm... in some cases, I already have the print books (some are on my Kindle too) but it just became a matter of choosing a more accessible format -- ebook or audiobook. Anyway, I continued with the self-indulgent binge reading that I began in March by reading what I want to read when I want to read it regardless of release date, genre, etc. The good news for me is that I am again reading, and enjoying, a little bit of everything! ROMANCE (Yay!), LGBT (Hurray!), Sci-Fi (Fireworks!), Fiction, and more…

South of the Border, West of the Sun by Haruki Murakami (Naxos Audiobooks, narrated by Eric Loren) 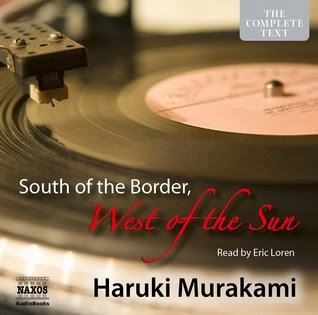 I began the month by listening to the audio book South of the Border, West of the Sun by Haruki Murakami. This was my second audio experience, and my first in a long time. I enjoyed the narration and was able to get lost in the story without getting pulled out or bored by his voice. The plot is another matter as I did not find it exceedingly fascinating. My ongoing lack of excitement had much to do with Murakami's main characters, particularly the male character's passive inaction and the female protagonist's almost ghostly essence, or better yet Murakami's attempt to make her a mystery goes so far until, in my estimation, she becomes a non-entity and nothing more than a vehicle for the male character's ponderings.

Murakami's main character, Hajime, is a man who allows life to happen. Hajime is in an almost constant state of emotional stagnation for most of his life. He is seldom proactive, forward momentum is missing. Hajime is aware of the disconnect that occurs between his thought process and the lack of action that permeates his life. The man marries, has children, and becomes moderately successful because his father-in-law provides him with the means to do so. He seems content with his life, although there is a sort of awareness on his part, a certain resentment, but again what is there to do but go on and succeed as best he can?

Since Hajime is both emotionally stagnant and disconnected, the majority of his interpersonal and personal relationships lack intimacy. However, this man has also been obsessed (note that I did not say emotionally involved) with Shimamoto, a young girl with a lame foot, since he was a boy. At that point in his life Hajime felt a connection with her yet when his family moved away to a nearby neighborhood he allowed the friendship to die. He proceeds to obsess about this "perceived connection" with Shimamoto throughout long years, using it as a pretext to sabotage all other relationships but never seeking her out.

A reunion takes place between Hajime and Shimamoto when she shows up at his jazz club later on in his life. By that time he is married with children, however that doesn't stop him from lying to his wife and risking everything in order to grasp that old and longed-for perceived connection. Shimamoto has lived and is supposedly living some sort of complicated life that the reader never gets a handle on, and first becomes too overtly coy and mysterious about her life, while later turning into the sort of foggy Japanese female whose essence as a character is rooted in unknown tragedy.

Overall, I found South of the Border, West of the Sun to be a highly atmospheric story, moody, with lots of rain, inner philosophical monologues about life and the complexities of human connections. This passive journey of a man without a true destination has some beautiful passages with music that becomes part of the atmosphere: classical, jazz, and old standard titles that can almost be heard on the background. For me, this was a taste of Murakami's work, but I will move on to read (or listen) to his better known works.

Coming up next: My Patricia Briggs reading binge continued in April with the complete Mercy Thompson urban fantasy series.