This overview of Patricia Brigg's Alpha & Omega series was originally written as my March 2015 TBR Challenge post. It was ready, however, my computer was down and I was not able to post it. I did not want to waste it, so I'm cheating and posting it as my March/April contribution! Included in my overview you will find two rereads, two TBR reads, and one new release.

-------
NOTE: Take into consideration that I came to Briggs' world from a fresh perspective, not having read the Mercy Thompson books.

I reread the introductory novella Alpha & Omega, and again was taken aback by Anna's violent introduction to her life as a werewolf. The sexual and physical abuse were a turn off to me when I first read it and that did not change the second time around. Additionally, the quick, 10 minute bonding between Charles and Anna's wolves was predictable. The fact that at the end Anna, after having been physically and sexually abused for years, went away with a stranger to a strange place in a matter of days, was a huge turn off for me. Wolf non-standing, her human self should have had more reservations. Those were still my thoughts after rereading the initial novella.

I also reread Cry Wolf. This is where my feelings about the Alpha & Omega series began to change. The book is a thriller in disguise. It's violent with action and a great mystery. But what stands out for me is that this is where Anna begins the process of discovering who she is as an Omega wolf, and learns what she can do. Additionally, although Briggs threw Charles and Anna together in that first novella, their relationship slows down so that Anna as human and wolf can take the time to heal. Charles as Anna's mate is the key to her healing, not necessarily because of the wolf bond, although that is a factor, but because Charles is also a patient and understanding man striving to make her whole again. Charles is a fantastic character -- fascinating in how divided and yet whole he is as man and wolf, lover and killer.

For me, those two sides of Charles really come to the forefront in Hunting Ground, #2 and culminate in Fair Game, #3. Hunting Ground focuses more on Anna's growing abilities and confidence as an Omega wolf, but Charles' duality, his conflict as the Marrock's executioner, is also present. I love Hunting Ground for the excellent introduction (as a new reader to Brigg's world building) to magicks and new characters, the other packs and of course more of Bran, the Marrock who rules the Alphas and the werewolf packs in the U.S. After reading Cry Wolf, I already knew that witches and black magic were part of Briggs' world, but I was surprised to meet vampires and the fae in this story. I particularly enjoyed the Arturian references in the thriller/mystery story arc, which by the way was rife with action, danger, and turned out to be a great mystery to the end.

But really, the fae and Bran really come to life in my favorite book of this series thus far (the one I LOVED) Fair Game! Wow! This book not only focuses on Charles' duality by showing his intimate struggles with his role as the pack's executioner, but it also brings the fae to light with a bang. In this fantastic urban fantasy thriller, Charles and Anna work closely with four agents from government agencies -- FBI, Homeland Security -- as well as two men from a shifter/other hate group to find a serial killer who has been kidnapping and murdering weaker half-breed fae. I also realized while reading this book that Bran is not only ruthless, but also a sad and loving creature. I'm really curious about this complex character and hope his story is told at some point. Fair Game is a well-rounded urban fantasy installment with the romance taking a step forward, as Anna takes the lead when Charles falters -- that is a lovely turn of events. And, it has a fantastic finish! Dramatic, unexpected, and just. . . yes, I loved this book.

Of course after finishing Fair Game, I immediately purchased and read the latest release Dead Heat. I liked it. In this book we see a relaxed Charles and a more confident Anna. A loving couple whose bond is in place. Dead Heat also has a good mystery to solve, one that involves children and the fae. However, the reader also gets an important part of Charles's past here as he and Anna travel to Arizona and meet his old friends at a horse ranch. I have to admit that although I enjoyed the scenes of Charles and Anna at this horse ranch, there are way too many of those scenes to be had. One of my favorite things about this book, however, is that I found out how werewolves are made! Gruesome, but key to Brigg's world building in my opinion. As far as the mystery goes, I figured out who the villain was early in the game (immediately), so although the chase was great, as well as heartbreaking at times, the climax was just okay for me. My favorite aspect of this book has to be how Brigg's shows her main characters' growth -- Anna's kick-ass confidence as mate and Omega wolf, and Charles' friendly and more vulnerable side with other characters beside Anna.

Conclusion: So yes, I'm hooked on this series. I love the world-building, the characters, and the thrilling, action-packed mysteries. However, going from that first novella where I was so turned off by the violence perpetrated against Anna and ending with Dead Heat, what I like the most about this series is how well Briggs deals with Anna's psychological healing. Briggs doesn't use the "love/sex heals all" device with Anna, instead it is a slow and steady process. Anna may never conquer all her fears even with Charles at her side, they both know this, but she is healing and growing. I love that. 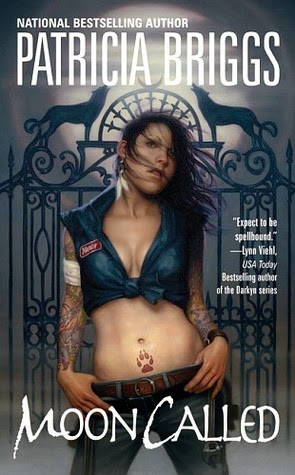 Throughout all these years, I read detailed reviews for the Mercy Thompson urban fantasy series because I never planned to read the books, so I knew that there was a triangle. When this series was first released I did not read UF, and hurtful, angsty triangles do not appeal to me. HOWEVER, after reading the Alpha & Omega series, I wanted to know more about the world-building and some of the characters mentioned, in particular Charles' brother Sam and their father Bran. So, after all these years I went ahead and read Moon Called. And guess what? I just finished Bone Crossed, Book #4 and am going on to read the rest of the series.
Posted by Hilcia at 1:16 PM