... On The Mirror Empire (Worldbreaker Saga) by Kameron Hurley 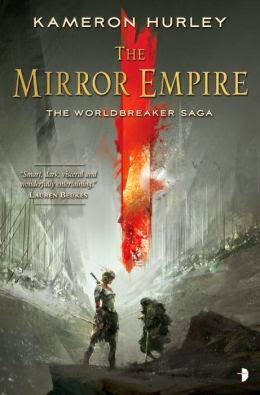 The Dhai know their world as Raisa where magic is ruled by three ascendant and descendant stars: Para, Tira, Sina. Parallel worlds with identical continents and inhabitants begin merging as the fourth star Oma, the worldbreaker, ascends in one world just as another is torn apart. After 2000 years, the veils separating the worlds rip, creating doorways between them, leading to chaos, destruction, deceit, betrayals, and war.

This epic fantasy begins with a tight focus on a few characters and quickly expands as some cross paths or veer in and out of each other's lives. Lilia, a young Dhai girl with unknown magical powers crosses worlds and grows up as a drudge until coming of age and deciding it is time to fulfill a promise. Rho, a parajista Novice with hidden powers and a peaceful future prognosticated by Seers refuses to accept his destiny and searches to change it. Akhio, an ungifted, passive male becomes Kai when his sister dies. Aware that he is unprepared for the position and a political pawn, he nonetheless accepts the post in order to investigate his sister's death. Zizili, a mixed raced warmongering Dorinian general butchers her people to please her queen, and betrays her queen to protect her people. And Taigan, an immortal Omanista assassin from Saiduan and traitor to his Patron, is bound to find other Omanistas to stop the invasion taking place in his homeland. His power is rising with Oma's ascension.

The title of the book, The Mirror Empire, has a dual meaning, one of them is a spoiler, the other refers to the two parallel worlds that mirror each other: the same continents, countries, peoples, customs, make up both worlds, with each corresponding individuals' decisions resulting in different destinies for them and influencing events taking place in their separate worlds. The worlds are independent of each other, but everything changes when Oma rises. When gates begin to open between these worlds and one intrudes on the other continents, countries, people, and empires topple and powers shift.

Gender roles, gender reversal, and polyamory societies all play a big role in Hurley's fantasy. For the most part, Hurley uses gender reversal by portraying women in alpha roles. In some cases, as with the Dorinian culture, the women are brutal, bloody warriors, with males portrayed as weaker beings treated as possessions, although to a certain extent (at least so far) the men seem relatively content with their roles. Within the Dhai culture women are portrayed as smart, power hungry entities with most of the power and responsibility, while men are portrayed as passive or intellectual beings, and in few cases as partners or warriors. It's interesting that although the polyamory societies created by Hurley feel organic to the world-building across the board, at times there is a discomfiting lack of balance in the gender role reversal with powerful women that cross into the cruel realm while males seem to accept this treatment as part of the societies to which they belong -- it becomes a matter of one gender overpowering another, a weaker one because it is either naturally passive or being oppressed.

Hurley's fantasy is filled with sentient nature (in some instances beautiful and in others cruelly fascinating), intellect, and the basest of human nature. The basic building blocks for different cultures and histories can be found in this first installment, with political intrigue, ferocious warriors, violence, and destruction driving the action and pacing. The Mirror Empire is a disquieting, unsettling read. The violence is such that it quickly desensitizes the reader to shock when more comes along. I cared deeply about characters when the story began, but as it moved along it was hard to keep caring about most of them and I ended up saving my empathy for a chosen few. It's a cruel world-building, but interesting, both colorful and grim, and vibrantly involved. I couldn't put the book away and will follow through by reading the next installment.