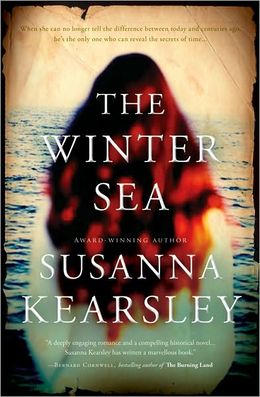 The Winter Sea by Susanna Kearsley is a combination historical fiction and contemporary with romances taking place during both time lines and running parallel to each other. Kearsley uses one central character, Carrie McClelland, to tie both storylines and romances together.

Carrie McClelland is a seasoned historical fiction author writing a historical fiction romance that took place in the midst of the failed Jacobite conspiracy to return James Stuart or James VIII to the throne of Scotland in 1708. Unfortunately, Carrie is suffering from writer's block, but while visiting Scotland fate takes a hand and she ends up at a place that calls to her, Slains Castle in Cruden Bay and there meets a man with winter sea eyes. Carry moves to a cottage within sight of the Slains Castle and begins the process of writing her story from the perspective for a fictional woman as the central character, one she names after a long-dead Scottish ancestor, Sophia Paterson. At first her story seems to spill out of her with characters and situations so vivid and real that she can't seem to stop writing, but slowly Carry's research shows that her characters and events, down to the smallest details, were indeed true. Carry ends up with more questions than answers. How can this be happening?

This is where I fell in love with this book. Kearsley seamlessly weaves two beautiful stories together. She focuses the historical fiction romance of the young, orphaned Mistress Sophia Paterson whose kinswoman the Countess of Erroll, mother to the Earl of Errol takes her in to live as her companion in Slains Castle at Cruden Bay. Soon, Sophia is embroiled in a Jacobite conspiracy to return James Stuart or James VIII to the Scottish throne and meets the young and loyal Jacobite John Moray who already has a price on his head for treason against the crown. Kearsley then proceeds to weave a gorgeous romance between these two characters that is full of danger, betrayal, excitement, angst, and timeless love.

I love that within this romance Kearsley includes historical characters John Moray, Nathaniel Hooke, Captain Thomas Gordon, the Duke of Hamilton, the Earl of Erroll, his mother the Countess of Erroll, and more. However, these characters are not portrayed as two-dimensional historical figures but become viable characters in the novel that contribute to both the story and the romance. I was particularly taken by the Countess of Erroll whose characterization is extremely well-rendered, as is Thomas Gordon. Sophia and Moray's romance made me sigh out loud, bite my nails at the danger they both faced, and cry. . . Yes, this was an emotional read for me.

But Kearsley's main character is Carrie McClellan and she is a historical fiction romance writer, so think of this as a romance within a romance. By setting up the story this way, Kearsley uses her character's portrayal as a writer to incorporate pertinent historical background and deftly avoids making it feel like info-dump, instead history becomes a key element of the exciting romance/story Carrie is weaving. However, this set-up also serves to give readers an intimate view into a writers world: how they conduct research, the writing process, and even little details like daily routines, and even relationships with readers. I loved that little peek into a writers' world.

All of those details are an intrinsic part of the contemporary storyline which includes a straight forward romance with Carrie as the female protagonist. This romance narrated in the first point of view from Carrie's perspective has little angst and not much conflict, but it includes some of my favorite secondary characters and it ties in quite well with the historical fiction story and romance. Additionally, in Mariana I loved how Kearsley executed the time-travel aspect of her story, in The Winter Sea although on the surface the end result of how Carrie gains knowledge about a different period in time may sound similar, in reality it is quite different and if not necessarily as arresting to me, how Kearsley develops this aspect of the story is definitely intriguing.

Kearsley's writing swept me away to Scotland, both to 1708 and contemporary times. This is only my second read by this author, but I'm loving her writing style, the excellent fusion of historical fiction romance and contemporary romance that she uses to whisk me away to another time while simultaneously keeping me grounded to the present, and her talent for bringing historical characters to life and creating a romance that stays with me. So, the end result is that I will definitely continue to explore her backlist with pleasure.


Part I: Group Read: The Winter Sea by Susanna Kearsley hosted by Christine of The happily ever after...