Review: The Favor by Megan Hart 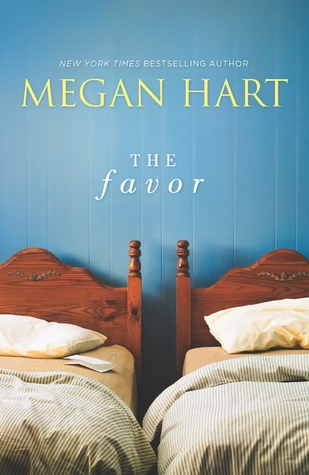 Janelle Decker has happy childhood memories of her grandma's house, and even lived there through high school. Now she's back with her twelve-year-old son to look after her ailing Nan, and hardly anything seems to have changed, not even the Tierney boys next door. Gabriel Tierney, local bad-boy. The twins, Michael and Andrew.

After everything that happened between the four of them, Janelle is shocked that Gabe still lives in St. Mary's. And he isn't trying very hard to convince Janelle he's changed from the moody teenage boy she once knew. If anything, he seems bent on making sure she has no intentions of rekindling their past.

To this day, though there might've been a lot of speculation about her relationship with Gabe, nobody else knows she was there in the woods that day...the day a devastating accident tore the Tierney brothers apart and drove Janelle away. But there are things that even Janelle doesn't know, and as she and Gabe revisit their interrupted romance, she begins to uncover the truth denied to her when she ran away all those years ago.

Two wild teenagers with secrets that would shape the rest of their lives, secretly reach for each other as a saving grace until one betrays the other's trust by asking a favor that ends up hurting everyone involved. Twenty years later, long after a tragedy visited the Tierney boys, Janelle returns to St. Mary's to care for her dying Nan and finds that Gabe still lives next door, now acting as a sort of care taker to his sick father and brother Andy. Moody Gabe. Unreachable Gabe. A sexy Gabe who does not want to give Janelle the time of day or even a chance to talk about the present, never mind act on the mutual attraction that still exists between them or discuss their shared, troubled past.

Hart utilizes the narrators, Janelle and Gabe, to deeply explore their characters by exposing personal flaws, intimate vulnerabilities, and raw pain. Through them, the reader also learns what drives key secondary characters. Chapters shift between the present and past, the present narrated by Janelle and the past by Gabe, as Hart keeps the reader intrigued by strongly weaving past and present events until all is revealed.

As in most good literary fiction, however, motivations behind actions by certain characters remain obscure, and it is left up to the reader to dig and/or interpret what lies behind those actions. For example, Gabe's brother Andy is key to the unfolding story, as is Andy's twin brother Michael. Yet, the real motive behind Michael's reactions is not revealed in detail to the reader, particularly when compared to Andy. Motives behind the relationship that took place between Gabe's parents are also implied but not specified.

Overall, the characterization is excellent. Janelle, Gabe, Andy and Nan all possess strength of character, which contrast sharply with flaws, fears, weaknesses and the dreadful situations they encounter. That contrast imbues these characters with a human touch that emotionally connects them with the reader. They lingered with me; Gabe and Janelle, Andy and Janelle's son Bennett, Nan . . . and yes, Mr. Tierney.

There are very few slow moments to be found, they are in a few sections where Janelle cares for Nan, otherwise the story flows at a steady pace. Plot-wise, I love how Hart conveys the dreadful situation taking place in Gabe's home by setting up a tense atmosphere through Gabe's present tense, first point of view narrative. There are dark spaces, moments, and although the darkest of the dark are not graphically described, they are there, strongly implied. This method of imparting information is so effective that I reread some sections to make sure that imagined details were not there! She uses this same method when Gabe narrates his secret, emotionally and sexually charged, encounters with Janelle.

In this novel, Hart explores selfishness and selflessness, parental abuse and neglect, guilt, regret, and love. Her characters survive dysfunctional familial relationships, wrestle with duty vs. love, and trauma vs. survival. In the end, is forgiveness always necessary or possible? When is it necessary? When is it possible?

When I search for contemporary fiction, I hunt for, and hope to find, novels like The Favor. Stories that keep me intrigued with substance, and emotionally invested in the characters. I read, have read, quite a few contemporary fiction books lately, and it is not easy to find the ones that deliver on the premise or do not overreach. With The Favor, Hart strikes that fine balance by delivering on the initial premise with both substance and fine writing, and not overreaching by maintaining a tight focus. Highly recommended.